Three theatres in Zurich have associated with the festival as this year’s hosts: Schauspielhaus, Neumarkt Theater and Bernhard Theater. The Theatre Encounter’s central purpose is to present to an open-minded audience the diversity of Swiss theatre with its different languages, each with its own distinct culture. Remarkable productions from various parts of the country are thus on display this year. In addition, the supporting programme offers several parallel events, aimed at theatre professionals as well as at new audiences.
As part of the festival, the Federal Office of Culture will present the Swiss Theatre Awards 2018 in the Schauspielhaus on 24 May.

The following productions have been invited to this year’s Swiss Theatre Encounter:

«Fünf Gründe warum Delfine böse Tiere sind» by KNPV
An action-packed black comedy about how a moral bank robbery leads to chaos. This virtuoso puppet show is spiked with cinematic references, such as quick changes of scene, video clips and slow-motion sequences.

«Grimmige Märchen» by Schauspielhaus Zürich
A bouncing sofa cushion in the living room flings the exuberant ensemble straight into a revue of more than 60 of the Brothers Grimm’s fairy tales – and the audience follows gladly into this strange enchanted world.

«Transumanze» by Teatro delle Radici
The text has been stripped down to a minimum: a series of tales tinged with nostalgia. No plot: instead on-stage frames containing bodies bruised by loss, abandonment and separation, filled with enchantment and disenchantment.

«White Out – Begegnungen am Ende der Welt» by Luzerner Theater
The brightness created by snow-covered ground and subdued sunlight peeping through fog or clouds makes people lose all sense of direction. A metaphor for resignation as the end of the world draws nigh. Yet hope glimmers through the fog.

«Beute Frauen Krieg» by Schauspielhaus Zürich
This production relates the story of the Trojan War from the point of view of the women suffering from it. The distinguished actors whisper, lament, analyse and expose power-hungry men in «fake news» mode.

«Quitter la terre» by Cie SNAUT
This play comes up with the radical solution of freeing the earth of its inhabitants for the time it needs to recover. An oblivious group of earth-dwellers is put into orbit in space capsules, while the others are sterilised and left to die off.

«Mesure pour mesure» by Think Tank Theater and «La bisbetica domata» by LuganoInScena were also invited to the festival, but for technical reasons neither can be shown at the Theatertreffen. 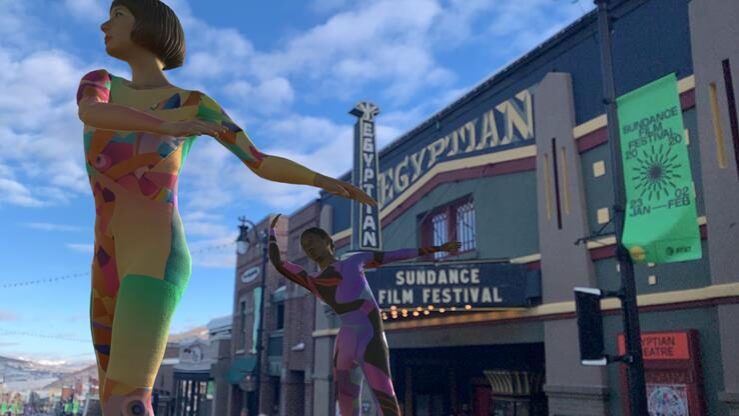 Online Projects in the Performing Arts

Gilles Jobin «Dance Trail» Dancing as an avatar, dancing with avatars – as a giant on the streets or as Tom Thumb on the palm of someone’s hand – Gilles Jobin’s app «Dance Trail» offers experiences in an expanded reality. The Swiss dancer and choreographer, winner of international awards for earlier virtual reality productions, created «Dance Trail» […]

The new season opened with a burst of creative activity after the summer holidays, but unfortunately it remained short-lived. Hardly had cultural events been brought back to life with all the necessary protective measures when a large part of our live arts was forced to close down again. Naturally, this gave rise to a lot of […]

Théâtre Vidy-Lausanne, Arsenic and Les Printemps de Sévelin have pooled their programmes and join forces. Discover the originality of the Swiss scene through many creations by renowned or emerging artists, from the fields of theatre, dance, performance and visual art.   For international programmers and curators, Programme Commun offers to organize the stay in Lausanne […]